Okay. I Give Up 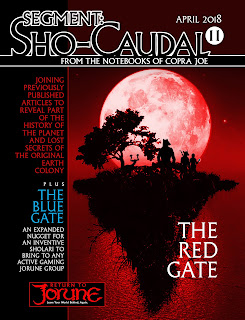 After weeks of trying to get the cover done myself... I give up. I can draw, but for me, the finished art must come with a mood to do finished art. The thing that marks a professional artist to me is the ability to do the work, on a deadline, whether they feel like it or not.
I'm not.
But I was able to pull together. pretty good collage based on a couple of sources.
A volunteer editor in the UK helped me put together THE RED GATE for this issue, and by the end of this week, I will have THE BLUE GATE, an expanded nugget, together by way of penance.
I'm started on #11 - OTHER PEOPLE'S JORUNE. Should be fun, even for me.
I think I like the graphic for these last few issues. I like playing with graphics and this one will take me thru to #14. Or #13 at least.

Word From the Outside

How nice. A travel writer took the initiative and wrote a review for SHOLARI v2n1. It is exceeding kind and points out the biggest flaw - my word problems.

Some people use my typos as authenticators. That lets them know it is really from me. he says I make typos, and leave words out sometimes. But, such is my legacy – and not just in gaming.

Go there, to that. I consider this to be a good review. Even my typos are given some kindness.

Available from DriverThruRPG.com.
at April 02, 2018 No comments:

And Steve Devaney, too! 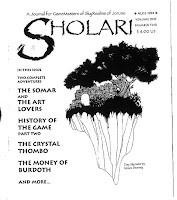 I wanted to include Steve Devaney's cover for SHOLARI v1n2 in the previous post. He has had the right feel for Jorun illustration for a long time.

But Blogger wouldn't let me add it. Screw 'em.

Look for more from this gentleman. Maybe music. Maybe more kids. Maybe line art. Maybe adventurous 3d model which evolved to the meticulously painted electronic cover of SHOLARI v2n1. And it includes a shipstone with the memorial statue of The Desti, the ca-Desti leader of the Eelshon, who led the assault in the Lamorri expulsion.

I have been sitting on a little pile of nuggets from many Jorunis in many countries. I have decided to pull them together for an issue of SEGMENT: SHO-CAUDAL. The Heridothians, Geoff Gray, and a handful of others. Should be interesting.

I am also looking at the whole "Sky Realm" thing. For me, the first flying land was a cheesy original musical for THE SHIRLEY TEMPLE STORYBOOK series around 1960. There was an episode called "The Land of Green Ginger" which was a mountain that flew. In the 1970s  Roger Dean did covers for Yes and others with flying mountains. It seems to be a cross-cultural archetype. Kind of like Angels - they aren't "gods" and there has been an enormous body artwork featuring them in Western Art, but they are there in other cultures, including the body of work with people who did not write anything down. The very story serves a purpose and, I suspect become a source of hope. Or comfort. And I do not want to bad-mouth anything that offers hope and/or comfort. 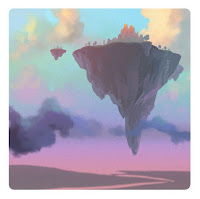 I'm just typing to fill out some layout space on this page so I can which includes lots of pictures of tiny little skyrealms from the internet. Some of them had names like 23598712355436.jpg, so I don't have a catalog of artists or sources. But with the Jorune to hang them on, I wanted to share. Join me as I jabber.

I particularly like the one I've labeled as "Crashing Skyrealms." It fits into my goal of exploring the new world. Not all Skyrealms stay in the air, though stable realms might float for thousands of years on a known trail of ambient Isho energies keeping the Ebba lode within charged. But when the charge is depleted - what happens.

I think like this artist showed, there would be descent that is sometimes dramatic (such as the crashed skyrealm from the Larmorri Expulsion, as described in SHOLARI v2n1, Scars of Far Temauntro. Sometimes is it would be almost graceful, with a mountain entering a ravine - not perfectly matched - and the tons of stone would press down, grinding boulders (some of which would float away) until there is a mountain with sorely mismatched strata and properties. And an enormous heart of empty crystals that had held the Ebba from which the whole levitated.

And on the right a sketch. I don't know who the artist is. I just popped up. 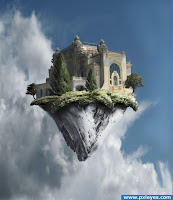 Something like this rock makes me think you could find a crystal - not perfect clear quartz but a silicon structure within other metamorphic stones. It might be ready to fly, or cracked and not quite able to leave home on its own. Still, held by threads of Ebba trapped in silicon that connect it to the rest of its own flesh. It may be there for decades. The Ebba will leak out but the stone structure will remain.

While there is Ebba within, putting it near a fire might make it struggle to lift as you watch, and understand.

It just makes me think.

Thinking about Jorune is, I think, good for the mind. Stress relief. Vacationing in my brain since the body will not let me travel. Finding new things.

And a lot of that is visual for me. In the 3rd Edition SOBAYID ATLAS, I wrote about "ship stones" that were small - a few yards across - and were on the brink of levitation. Ebba crystals are triggered by heat, which is why Desti is so important for the controllers on airships. In the morning, when the sun reaches and warms the stone, the ship stones rise higher.

On the left here, just a painting I found somewhere or that someone sent me within the last decade. Very cozy little shipstone. I'd unroll a sleep bag there for a long ride.

If their charge is too low, they may spend the night actually laying on the ground. And with those high root and peak structures, they aren't going to settle down in a level stand. They may stay connected to the ground for the whole night - giving a freeloading passenger a chance to hunt up a little breakfast (careful you don't miss your shipstone when it rises because it will be out of here...).  During the day they float, higher on warm days, and at night they sink.

Jorune has made me think. I will miss it when the SEGMENT: SHO-CAUDAL runs its course, which will be Issue #14. It may be under another name, but it will be SSC #14.

I have an image in my head I would like to find a realistic artist to execute. Ebba. Pockets of the flowing Isho lava deep below the ground. Lava heating the Ebba. Somewhere on Jorune there are volcanos where the Ebba flows up into the sky. The silicon cools and becomes a crown of floating stones that drift away on the Sho-Caudal - the Isho Wind. Some are like old tube TVs, some are like large earthmoving equipment (which they ear). Some become parts of enormous clouds of baseball sized debris, some are more inclined to come crashing down.