Back on the horse...

In the past six weeks, I was able to get #11 OUT. I also had two shots in my eye, a surgery on my right let, am waiting on surgery on the left leg (trying to keep them), and two falls ... nothing broke except my pride.

AND I've had more-than-normal problems with my OSX.

Working on the immigration application from the Colonial Authority in the 23rd Century for emigres to Jorune's World, with the full Bash to get Jorune into n existing sci-fi game. And ORFA as part fo the bash.

Do people know "bash"? It comes from the old day of model building and hit a new crest with Star Wars. It is where you "bash" parts from model kits to make a new model - like the Destroyer from the opening scene of A NEW HOPE. My crowd bashed games to get setting and system that suited our particular favorite flavors. After a while, you forget there was anything but the bash, and it makes it difficult to move into other areas.

So I'm doing a different take on the SAK - Sholari Adventure Kits. I provide the bits and you bash them to suit you or your group's preferences. There was a Jorune before Iscin, or the separation of the Colony from Earth and the Colonial Authority.

I want to explore that.

So, SEGMENT SHO-CAUDAL #12 will have that three-point stance - Colonist recruitment - Jorune Bash - ORFA. And it will take a few minutes to put together (as the kids say). I'm not sure when ti will hit the emailboxes, but that is where my effort is. 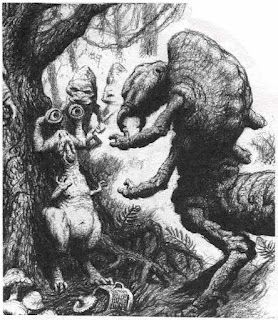 I've made a few other decisions:


Anyone interested in a few pieces of art to spice up the production - I do pay in percentage of sales, and when we move back into print from the PDF only, it gets involved.

* Advance purchase. Several times in the past I have done the "Advance" thing for different projecdts, including Jorune. And i have delivered. 12 Issues of SEGMENT: SHO-CAUDAL, for examplle. People put in some support. Once upon a time I did a "the next three projects" and those people go their money's worth with ANNALS OF THE TAN SOOR HISTORICAL SOCIETY, GOMO GUIDE: THONEPORT (2 versions), and SHOLARI v2n1. I may offer two "Advance" options, but for PDF only. Print is an option but it is material, not the tangibility. Or I may rethink to offer a "Print" option, which will be included for more, but PDF-first. I will decide and post when it is time. We're talking $20 for the next three, maybe $40 for next three print (US, with additional postage to other destinations where applicable - Ii don't like calling it "foreign." I'm too much of a hippy).  Comments are invited.
at June 18, 2018 No comments:

Last time I announced that I was completing #10 before I actually mailed. Mea culpa.

#11 is completed and has bee mailed out. In the emailboxes of my subscribers. Paid Subscriptions and "House Copies" have all gone. The cover is a great piece of art by Fred Lang, dedicated Joruni.

#12 will focus on the promotional drive to get people to leave lovely, science fiction Earth to go to a distant world to live under the primitive conditions of 21st Century Medicine and 20th Century - or earlier - technologies. But you can't get a 200-acre homestead on earth anymore, and the natives have put strict limits on the amount of land available to the immigrants. The United Nations and Colonies Office of Colonial Authority have made the information and applications available for would-be colonists, as residential frontier-person or contract workers to populate research and trading stations. Way retro-formats like to-print documents, but published in all the regular languages.

But more on that later.

Isn't It Ready YET?

It has gone from the promised 16 pages to 55 pages.

More than half of it is the conflict between American-English and UK-English, mixed it with the couple thousand of identified Jorune words from the glossary, plus the individual Jorunish words created for the articles in question.

And the problems with language and spelling are so bad, even I can tell they're wrong! That's a clue.

On that add the damage taken int he right elbow in a fall on June 9th. I have another doctor's appointment tomorrow, but not for the elbow. For the foot from which a big toe was almost deleted to see if it can remain undeleted. Then I have an appointment to see if I get another shot in my left eye and its Macular Edema. And after THAT appointment I will be able to go to my primary doctor to see if there is something we can do with the elbow joint. IF the second surgery on my other leg is not sprung upon me and my schedule and resources. If. That mean there are only THREE scheduled doctors appointment in June. So far.