Even while fighting with a new opening on the leg and fighting to keep it, Jorune figures into my energies. Every time I turn around there is another piece I want to add to SEGMENT: SHO-CAUDAL #13.

But I've found a way to fold in these last references into an exiting project and closing the books on SSC. The things I have wanted to do is an expanded, if not full, a glossary for the determined Sholari. That would be the words, in various languages. But the full glossary would include the language from which the word is taken and suggested pronunciation. Locations in said glossary would be entered in ALL CAPS to make them stand out from the simple sounds.

At this point, there are approximately 3,000 words in the lexicon, without all of the casual mentions of districts, streets, business names, and other details with which writers have peppered the lore over the past 27 years - since the publication of the Third Edition.

I am currently going through the Fanzines since that is the only lore there is. It is clearly unofficial because after fighting for almost three decades, I have accepted that there will never be a fourth, official, corrected edition. It is like watching a parent strangle their child, but... not up to me.

I have taken the most recently expanded glossary and started the slow trudge through the Fanzines. So far I have included all four issues of Sholari, Annals of the Tan Soor Historical Society, and have started into Danstead traveler (I have all four issues in one document, but Kym has put surprisingly few new words into her travelogues, other than possible NPC names). After that will come to Borkelby's Folly, and the whole of Segment: Sho-caudal. I am debating going through Sholari James' work, but he pulled his work from my attempt to combine them into a "Collected" edition, as did the editors for Danstead and Borkelby. I don't have a full copy of Sarceen's Knowledge to go through.

Obviously, that project creates a lot of work ... all the meat and no potatoes. So I will fold this last work for a full lexicon into a commercial version of ORFA: JORUNE. Not that I expect a stampede for such a product through DriveThruRPG.com. I will also make a free version of ORFA available for gamemasters to use in whatever setting they find appropriate. And my notes for a pulp setting, my main Earth-based fascination, will also be released through the same channel.

On the side, I am programming a PDF to allow me to generate ORFA: JORUNE characters and export them to graphic sheets so that with the DriveThruRPG release there will be a collection of races and occupations, mixed up to create some interesting characters as starting points for whatever new sessions fresh sholari can put together.

I will finish the Jornne introduction video that will take the ALIEN LOGIC introduction as a jumping-off point to introduce more of the world to a new population.

When I step away from Jorune, I really want to leave behind something that next poor fool who gets the addiction will be able to pick up and run with to whatever goal he/she can envision.

Things seldom wind up the way they began.

Google has been juggling it's coding and today I discovered that two posts I thought had been made to the Jorune blog were, indeed, made to other blogs I maintain. No one there mentioned it and I don't think there ws enough to worry about transferring everything. I'll have to watch my loggings in the future.
at July 31, 2019 1 comment: 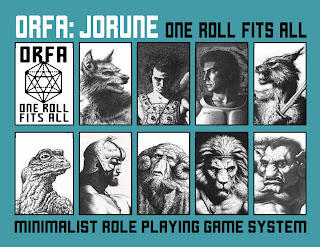 The PDF for ORFA: JORUNE has been sent out to SEGMENT SHO-CAUDAL subscribers. 44 pages, of which about 35 are Jorune specific - only 10 pages of system and character generation. That's all that is needed.

This was played in California, Colorado, North Carolina, and at several conventions around the country. It is intended to allow newcomers to Jorune and/or role-playing to get into the world and play. Experienced players can get a game going, and there are races that can be chosen. And get a game going.

I think getting a game going is - key.

I will be posting fully generated NPCs to view the system and see how you might like a new game.

It can be found on archive.org by searching "SOJ RPG" and the whole batch of free files will pop up. About 800 pages.

(Or if you ask me nicely in a private message, or returntojorune@gmail.com - not as a response here.)