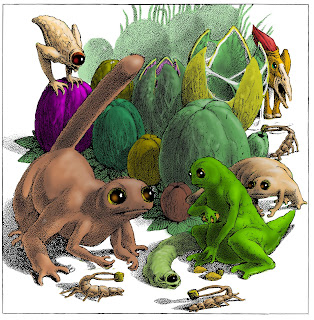 I'm working on SEGMENT: SHO-CAUDAL, the JORUNIGRAPHICA, and beyond (of course).

I am happy to report I have come to a point of peace with Jorune. I will continue to give energy to that world in appreciation of what it's given me, but the pressure seems to be off.

I'm very gratified with the response to the "Advance" subscriptions to the next few projects. And I have coded this little army as "Full," which means they will get whatever Jorune I come up with. The PDFs at least. I'm not yet to the point where I can afford to print and mail hard copies, but I believe it is the material they are receiving. Not the artifacts.

I will end the Advance link shortly, to keep from getting later pressure, and I will do the bundle of the completed Segment: Sho-Caudal

So the list Jorunalia may grow. But I'm not committed to any of it beyond the fact that I will continue producing. (I do like making up words that carry the meaning I intend. I was doing that long before Jorune.)

And the latest thing for me to produce is a video to invite people into Jorune. I'll post it to YouTube, but it will feature the history of the game, the editions and supplements, the fanzines, the computer game, and whatever else seems appropriate. I'll use the introductory video from ALIEN LOGIC (until I'm told to cease and desist), which has my voice, and expand into a survey of the materials, the world, the races, etc.

The idea is to have a video where a wanna-be Sholari can point his/her players for a common agreement of the world and the beginning of the game.

But I'm more relaxed with it. I am getting my novel CLIMBING THE SPIRAL MOUNTAIN gussied up for its cotillion presentation to the world with some promotional efforts. You might like it if you walk around on this planet and want to see inside someone else's journey. And the fantasy novel SONG OF ORPHANS will follow, a different world with some low-level magics, reflecting my interests long before Jorune came into my life.

And there is a good chance that - good lord willing and the creek don't rise - I will finish THE ANGEL OF DRAIL. I know the story, I just have to take the time to spread the gossip from the little knothole of a view I have into that world and those people. I deal with a lot of Thivin and Trarch, who have always fascinated me.

There is so much more to Jorune than just Tauther being shanghaied to do favors to scuzzy nobles from Burdoth.

For several years I wanted to do Jorunigraphica, but a simple article for the last issue of SEGMENT: SHO-CAUDAL has grown beyond all reason.

Jorunigraphica was to be. reference to the geographic locations of Jorune, where a Sholari might be expected to run a team through some kind of romp and circumstance. And I thought it would be nice to do a one-page map as a programmed PDF. Roll. your little mouse over the map and a pop-up would give you where, in the body of Jorune matrial, you would find information about that spot on the map.

So I started doing that. Programming buttons with pop-up messages isn't all that difficult and I've done that before.

But restricting it to fanzines means I'm looking at about 600 pages of material to wade through.

So it may spin off, wildly threatening to this planet and there could be no survivors.

I think it's because I had a good response to my "Next Three or Next Five" posting. That encouraged me and while working on SSC #13 I thought I needed a break. And gave birth to this monstrosity. 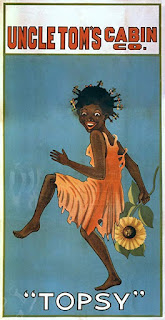 In UNCLE TOM'S CABIN, the slave Topsy was asked how she was raised. "I wasn't raised - I just growed," she said. I won't get going on the paternalistic, racist nature of the characters presented, particularly out of historical context, but the quote applies.

And so it is my Jorune.

I was thinking I had SEGMENT: SHO-CAUDAL #13, CHILDREN OF BOMOVERIS, and GOMO GUIDE; TAN IRICID, was all I had left to be done.

Oh, there is ORFA (One Role Fits All) for Jorune. Well, that, of course.

And the promised JORUNE BASHING article I casually mentioned I would do back in the first issues of SSC. Of course, finish that.

But the COLLECTED series. That is COLLECTED BORKELBY'S FOLLY and COLLECTED DANSTEAD TRAVELLER. But I lost communication with those editors, but long time Joruni ___ put me back in touch with Ray Gillham. So, Borkelby's back on the boards. I have not had a response from Kym Paugh since she went into hospital two years ago, but I'm hopeful. 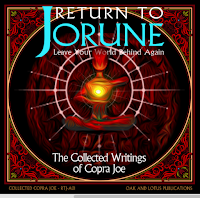 And I finally decided to with the COLLECTED SHO COPRA JOE*. Yeah. My stuff. Properly edited in one volume from Sholari v1n1, v1n2, v1n3, Annals of the Tansoor Historical Society, and my articles from SSC, all gathered up into one volume. (But not my stuff from the Gomo Guides or Sholari v2n1). Hard copy.

Oh. The novel. ANGEL OF DRAIL. Yeah. I already know the full story, it has been outlined, so its just the petty matter of writing the whole... yeah. That. Okay. Put that on the list.

One thing I've done with the past few print projects - I set up my recent DriveThruRPG titles to make the PDF the big purchase, like $12, and the hard copy is $14, with a free PDF included. I do pay some royalties to folks who have been working with me - others have been kind enough to refuse royalties.

I feel like a mobster from the old Hollywood gangster movies. "They pull me back in..." 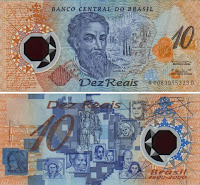 The problem is I'm leaving Jorune because of energy and finances. Energy in the sense of my available time on keyboard or online, and finances because - I don't have them. I need finances. I'll take filthy lucre in almost any form. Dollars, Pounds, Euros, Zloties, Rial, Yen, Rupees, Bhat, Pesos, Bolivars... really. Collect them all. My medical stuff, which I'm told put people off, requires I have finances to do things - particularly in this country with its criminal medicine for profit system.

So I've decided to revive the old "Advance" schema used previously. in the past four years I've averaged one release every three and a half months, so I think I have the track record to put out the offer for the Next Three, or the Next Five, Jorune releases in PDF format, in advance of public release. Whichever titles they may be. Or you can choose the option where people, who might feel so inclined, to just make a general contribution to keep me, and my projects, moving forward.

The "Next Three, or Next Five", link is here.

And I have to get back to work.

____
* I may have already mentioned that I chose Sho Copra Joe as my nom d'Jorune to reflect my feeling about my relation to the world. I don't consider myself to be a master, but a student of Jorune learning as much of the world as I can. And I might be the Most Elevated (Sho) Student (Copra) on this planet. I can accept that, with its ego. I'm not a Sholari, the most elevated teacher, but content to always be in a position to learn more. Which can only be shown to me by other people revealing their vision of that world.
at May 18, 2019 No comments:

The torch of Jorune will pass and I am about to make an offer to people who supported the Return to Jorune project over the past several years. I think I have enough of a good reputation of completing my commitments in the past that people will be open to what I offer.

I made contact with Ray Gilham (thanks to Matthew Pook) and his Collected Borkelby's Folly project moving again.

Efforts continue to find Kym Paugh (of Danstead Traveller fame) to get her collection going again.

And I am chewing Segment: Sho-Caudal #13. Bakers Dozen. What is the Joruni word for "Baker"? Maybe Baker's can't count.

A while back someone suggested I gather all my material, give it a proper editing, and release that, too. That means Sholari #1-#3, Annals of the Tan Soor* Historical Society, and all 13 issues of Segment: Sho-Caudal under one cover. Edited.

I'm warming to that.

The finale will be the campaign that fueled my California group from 1992 to 2001, The Children of Bomoveris.

I am looking forward to seeing what other people bring to Jorune.

* A couple of people complained that it is "Tan Sor." No, two different words. Tan Sor is the low gate of Tan Iricid - the security gate non-servents of the Mountain Crown must use to enter. It is Corastin controlled gate where a visitor presents a giddyne for admission. The Tan Soor is the high gate, for the students, the servants of the Mountain Crown, enter. Attempting to pass through the Tan Sor without permission of the Corastin guard will get you flattened. Entry through the Tan Soor without proper credential may lead to prolong imprisonment, interrogation, and flattening. That will be explained in the Gomo Guide: Tan Iricid. And has been hinted at repeatedly.
at May 14, 2019 No comments:

I completed SEGMENT: SHO-CAUDAL #12 and got it out. Nice.

I posted notices on the Yahoo Jorune Group, which seems to be completely dead, and the Shambo in the Shenter page on Facebook, which is mostly dead. 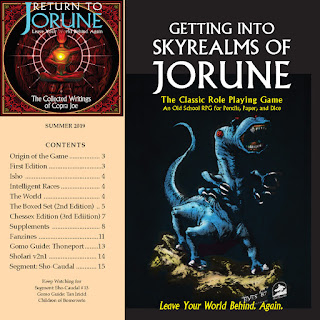 But I got a request for information and that let me review the state of the Previews. Too old. So I did a new preview - 55 pages, including all twelve covers. Too big for most email gateways - over 20 Megs. But I don't want to cut it down. Maybe I can improve the compression, but until I do there are a couple of options.


But my tiny brain got hooked on it and I did a different introduction to Jorune. There are already three introductions through the links to archive.org. But I decided to do a document/PDF in the "new" format - 8.5 x 8.5. This introduces the game, the editions, the supplements, and the fanzines, including GOMO GUIDE: THONEPORT and SHOLARI v2 n1. With links to sales on those two with DriveThruRPG.com. And, of course, a link to the SEGMENT: SHO-CAUDAL page.

Which resulted in one sale in the first 12 hours it was up, and the inquiry that prodded new sampler.

The Sampler #3 and the GETTING INTO JORUNE PDF are intended to be shareable. Send them to anyone you think might be interested. Post the link where-ever you think someone might get the Jorune infection started.

If it is just me posting, people are annoyed. If three or four people were to comment on such posts or make their own posts (gasp), it could be taken as more than one crazy guy.

Very few people view this blog so it could be taken as a conspiracy.