You Can't Keep a Good Gire Down

Back at work on ORFA:Jorune.

I wanted to add glossary, came up with a 1 page introductory glossary, but got back and where I wanted to do a glossary project a while back, I had a rough glossary from several sources. They are a bit of a mess. Conflicting formats, duplications... and this is only sources who cataloged words from the Primary Canon... mostly 2nd Edition.

The original goal was to add all of the words from all of the fanzines into a real lexicon. All of the Sholari James, the three Borkelby's Follies, four Danstead Travellers, four Sholaris, Annals of the Tan Soor Historical Society, and Gomo Guide: Thoneport. Maybe even Gomo Guide: Tan Iricid. And there is a lot of that stuff. I suspect the new total would have been well over 3,000 words.

But that didn't happen, although one person volunteered. I didn't set up the online database for the project, but neither did anybody else.

So I took the raw list and spent today working on the programmed PDF to generate characters (a different sheet for each race, with modifiers programmed in) and the inclusion of the raw combined glossary.

The plan is to include it with ORFA: Jorune, which will go to the subscribers (less than 2 dozen) and the Pateron patrons (less than ten, with some duplicates between the two groups). The PDF will include programmed sheets for each of the races, with each filled out with a fully generated character. Each sheet will be blankable with one button to reset the form, and another to email it to me. These will be templates so you will still have a blank racial sheet with all of the modifiers. I want to see what you come up with for your game.

Yeah, I haven't worked on it for a while, but I just spent the whole day working on it. And a good deal of progress was made.

Generation has been modified to include base values that vary by race. Your points will be added to that base so you can make exactly the kind of character you want (within racial restrictions). Isho is complex during character generation, but doable. Once you set up your Isho, during game play it will be as easy to throw a dysha as it is to pick up a rock and throw it. 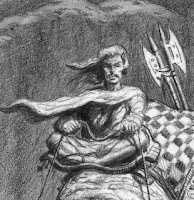 It was Andrew's goal to find a system that could reflect all the different races and have simple combat with Isho. ORFA has it.

And I am also building the pulp version of ORFA - Heroes for Hard Times. I've pulled the "Weird Powers" from a previous version and it plugs in to replace Isho on Earth, 1937, quite well.

I haven't abandoned Jorune. And I just got word the Jorune 5th Edition OGL D20 (iD20) is not dead, merely slumbering. It should be back on track after the chaos of the Coronavirus tones down.

Earth with Coronavirus is not fun. I'd rather be in my little villa overlooking the Ponteer Trail. Tropical winds and travelers from many lands to meet.

Join me when you're in the neighborhood.